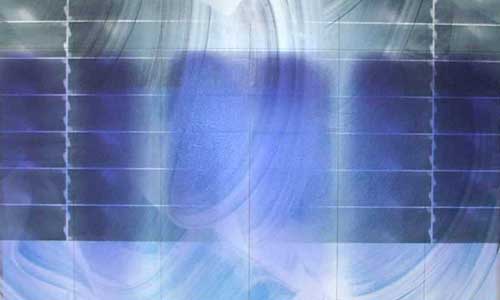 Japanese artist Hideki Kimura uses the latest computer technologies to create prints that experiment with form and color. For one series he took inspiration from the abstract paintings of the famous Dutch artist Piet Mondrian, often resulting in an image that is soft, fuzzy and rearranged, but still recognizable as Mondrian. He feels the result of his interpretation is a collaboration during which he is confronted with the other artist’s “baffling balance between passivity and activity.” By making this work he feels that he is exploring rationality and that he is constantly confronted with his own cultural background. It becomes kind of a spiritual and philosophical journey.

Kimura attended Kyoto City University of Arts were he completed both an undergraduate and post graduate course in oil painting. He then moved to the United States in 1988, where he attended the Graduate School of Fine Arts, University of Pennsylvania. Hideki Kimura later returned to his native Japan in 1995, where began as an Associate Professor at Kyoto City University of Arts. Kimura’s work has been exhibited extensively all over the world in both solo and group exhibitions. Some exhibitions include International Biennial Exhibition of Prints, Tokyo, Japan; British International Print Biennial, Bradford, UK; International Print Biennial, Krakow, Poland and The Exhibition of Contemporary Japanese Prints, Ferrara, Italy. His work is included in the collections of the National Museum of Modern Art Tokyo, Kyoto and Osaka, Museum of Contemporary Art Tokyo, British Museum, Victoria & Albert Museum, The Philadelphia Museum of Art and National Museum of Art, Warsaw as well as many others.