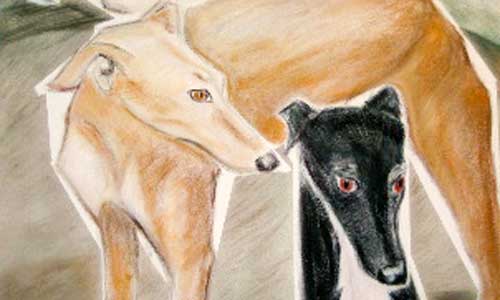 Susan’s paintings are about movement and endless possibilities at any particular moment in time. She sees all nature as a unified field in which every tiny particle of matter exerts an influence on every other particle. Her theory is somewhat similar to quantum physics.

Susan’s recent body of work reflects her interest in the environment and cohabitation among all living creatures. Susan has developed a figurative painting technique she calls "friskitting" which involves isolating figures from the foreground and layering oils in a transparent application similar to watercolor. There are multiple layers and transparencies that reveal meanings and deep personal stories behind the images.

Susan is also influenced by her Catholic upbringing and fascination with the symbols and stories of sainthood she studied as a child. Much of Susan’s imagery comes from her own photographs, her memories and spiritual iconography. There is strength and compassion in the eyes of her subjects, both animals and humans. Her exquisite sense of color and unexpected cropping and point of view are a transcendental experience.

Susan has worked professionally as a muralist, illustrator and photographer. She has also taught art to New York City school children. She has exhibited her paintings, drawings and photographs in New York, Philadelphia and Tokyo. This is Susan’s sixth exhibit and the first solo exhibit of her paintings since 1995.