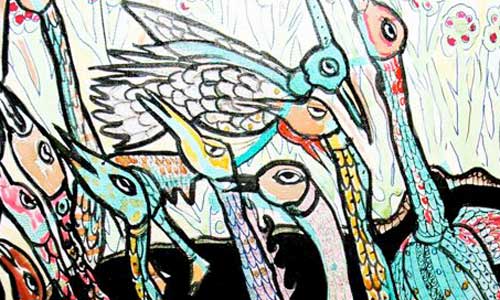 Though his given name is Taiwo Olaniyi Salau, the Nigerian artist Prince Twins Seven-Seven has chosen this pseudonym as a reference to his birth: he is the sole survivor of a line of seven sets of twins. Twins in Yoruba culture are known to have special abilities denied to ordinary people. Prince Twins Seven-Seven is a prominent artist, as well as a bandleader, teacher, dancer, actor and spokesman for Yoruba culture. He began his career by drawing on paper. The originality of his line comes from the fact that it appears to unfold blindly, with no plan, through a progressive invasion of the entire surface. An extraordinary wealth of detail saturates every square inch of his canvases. With the exception of a few paintings (for example the satirical politician), the universe of Prince Twins Seven-Seven is thoroughly rooted in Yoruban visionary imagery, both religious and folkloric. Between the world of spirits and that of the living, between the natural and the supernatural, the real and the mythic, the exchanges are constant.

In 2005, Prince Twins Seven-Seven was designated UNESCO Artist for Peace, and that same year was added to the collection at The Philadelphia Museum of Art. He passed away at the age of 67 on June 16, 2011.